Our fully redundant core network and backbone connectivity is unsurpassed in its efficiency and performance. With eleven separate sites, located in five different states on both coasts, plus fully redundant architecture out of all of our data centers, our network offers extremely low latency, no packet loss, and, best of all, direct connectivity to all major global Tier 1 backbones and other major networks & Internet Service Providers (ISPs). This unique combination provides a superior network infrastructure with unmatched quality of service.

Our network is legacy-free and utilizes only the latest in Cisco networking equipment. Our network is also fully redundant at each and every level possible, there being no single point of failure. And, our network is fully fault tolerant and able to withstand a major disaster.

PAO1 - network presence at PAIX, for peering with major networks/backbones, ISPs, cable and DSL providers; many Asian networks in particular are located at PAIX; also for transit sales and direct commercial transit connections. PAO1 is located at Switch & Data in Palo Alto, California.

NYC1 - network presence at NYIIX, for peering with major networks/backbones, ISPs, cable and DSL providers; many European networks, especially, are located at NYIIX. NYC1 is located at Telehouse in New York, New York.

LAX1 - network presence at Any2 Los Angeles, for peering with major networks/backbones, ISPs, cable and DSL providers; many Asian networks in particular are located at Any2 LAX. LAX1 is located at CRG West in Los Angeles, California.

Reliability You Can Count On

The northern Virginia / DC area is an ideal location for data centers. A very significant portion of the world's Internet traffic passes through this critical area, and the area is not subject to earthquakes, tornadoes, floods or other natural disasters. With two data centers in Northern Virginia, and a West Coast data center in Seattle, WA, we are able to provide the ultimate in multi-site, geographically-dispersed, mission-critical hosting services.

We are located at the true heart of the Internet, and in a very safe and secure area. This central location ensures optimal connectivity, speed, and routing, minimizing the number of hops - and thus the chance of any problems. We are located right beside a great number of of private and public peering points, in one of the most densely and best connected areas in the world: including direct peering at the Equinix Exchanges (IBX'es) in Ashburn, Virginia and Chicago, Illinois; at the NYIIX in NYC, New York; at PAIX in Palo Alto, CA and Seattle, WA; at the SIX in Seattle, WA; and at Any 2 in both Los Angeles, CA and San Jose, CA. All providers have multiple, redundant routes into the DC/VA area. This is further built upon by our redundant connectivity to multiple Tier 1 providers via separate circuits, terminating at diverse locations in Virginia and the District of Columbia. We have redundant connectivity in our Internet set-up (multiple backbone connectivity providers), as well as in our physical infrastructure. In terms of fibre optics, we have multiple private OC-192 SONET rings with multiple financially-healthy fibre providers, taking different physical paths.

Likewise in Seattle, we are located in a stable and level area (ground level of a well-built single story facility), providing the best resistance to earthquakes, and have multiple diverse-path fibre transport circuits with OnFiber, Q.West, ELI, Integra Telecom and Sabey. Seattle is one of America's best connected high-tech cities, is an excellent base for high-performance, reliable Internet connectivity, and provides some of the most reliable power found anywhere.

We have built our facilities in the best possible areas for Internet connectivity and electrical utility reliability, and then further reinforced them with redundancy in all possible forms. For example, we are able to offer multiple location hosting with the inherent advantages, such as low latency and direct connectivity of the same IP network, yet the redundancy and security of three separate Data Centers in two different states, over 2500 km physically apart (Virginia & Washington state). Under 5ms (0.005 second), 10 miles, apart, DCA2 and DCA3 are available for ultra low-latency dual-location hosting needs, while DCA2 and/or DCA3 plus SEA2 add up to a 2500+ miles apart fully geographically redundant hosting, just some 70ms (0.07 second) apart, on the same reliable and secure coast-to-coast IP network.

To ensure the best routing of our customers' data, in addition to peering, we also pay for commercial top-priority transit network capacity to our tier 1 backbone providers and have full burst capacity available at all times on all circuits. Thus we receive the highest level of service, including 99.99% or 100% uptime and no packet-loss guarantees, from all our connectivity providers. 90%+ of traffic from Superb to end users passes over only one or two backbones on its way to the end destination.

In addition, we are committed to under 50% network capacity utilization at all times; we ensure that our network always has double the capacity it needs, even at peak hours. Furthermore, our core network routers always have not only dual power supplies, but, where available, power feeds to each power supply from a different power grid and UPS system - thus ensuring the ultimate in reliability.

Our transport between Ashburn, VA, Chicago, IL, Palo Alto, CA and Seattle, WA is provided over redundant Level 3 and Global Crossing SONET rings. For transport to New York we are using Level 3 (former Looking Glass Networks). All of our fiber carriers are financially healthy and well-known major telecoms, with proven 100% uptime and reliability—Looking Glass Networks, Level 3, Cox Communications, OnFiber, Q.West, ELI, and Integra Telecom. The OC-192 SONET rings consist of two redundant OC-192s, traversing two separate paths and having two diverse routes to our facilities, thus providing the ultimate in reliability and performance. Consider this technological miracle: Even if both of the lines are cut at any point, the SONET ring is still operational, with less than 50 ms (0.05 second) self-healing restoration time.

The multiple private SONET rings provide us with the ultimate in reliability: no downtime, ever, even in the case of a major fibre cut in the area (due to separate paths and multiple fibre carriers). 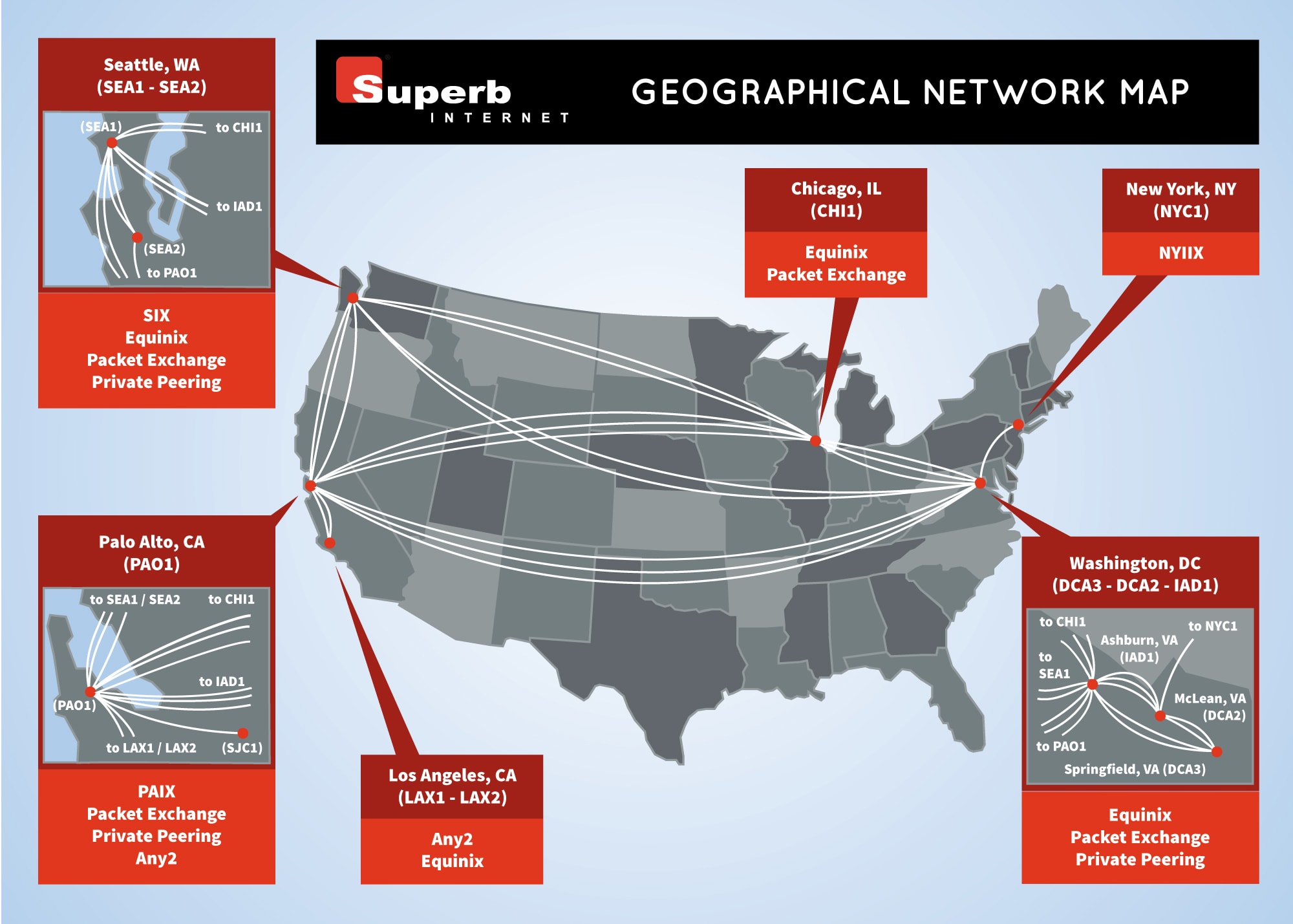 Why Superb's Network is Faster:
Our Core Network Sites are All Directly Connected

Our infrastructure has been exhaustively tested and designed to ensure that traffic from each one of our sites "considers" all possible outgoing routes - including routes through all the other sites, weighted for physical distance, reliability, performance and latency - and "selects" the most direct, lowest latency route available to the destination. That is, all the packets take the most direct and fastest way out, and have a full Border Gateway Protocol (BGP) selection of all the transit providers and peers available at all sites (not just the transit/peering lines present at that particular site).

This latest version of the Internet's routing protocol is a "path vector protocol," which has made the Internet a fully functional, decentralized system. The network is fully inter-connected and meshed. A good example of the design in operation is "Open Shortest Path First," (OSPF) for improved redundancy and speed.

In addition to buying commercial transit from the world's major tier 1 backbones, we also have an extensive peering network established. Peering is the process whereby one network provider, such as us, connects to another one directly -- bypassing the "middlemen" (intermediary networks). Peering provides a more direct, faster, and shorter route than transit by bypassing other third-party networks, resulting in considerable performance & reliability gains.

However, very few networks engage in peering, as typically a coast-to-coast IP backbone is required for a network to qualify for peering (so only very large national or International Internet networks even qualify to peer), and it is considerably more costly and time-consuming to maintain many 100s, if not 1000s, of peering connections, vs. just a few transit links. We, however, always go for the best and invest the time and the resources necessary in order to ensure that our customers enjoy performance that is truly "Ahead of the Rest."® More than 50% of our network traffic exits directly to our peers, bypassing the intermediary transit networks - thus resulting in superior performance, redundancy and reliability. Your packets reach the destination faster: with less hops and lower latency.

We have a large number of peer sessions (over 500), composed of major national & international backbones, ISPs and content providers, at the Equinix Exchanges (IBX'es) in Ashburn, VA and Chicago, IL, at NYIIX in New York, NY, at PAIX/Equinix in Palo Alto, CA and Seattle, WA, at the SIX in Seattle, WA, at Any2 in both Los Angeles, CA and San Jose, CA, and at PacketExchange in Ashburn, VA, Chicago, IL, Palo Alto, CA and Seattle, WA, in addition to a number of private peering inter-connects. A partial list of our peers follows, below. Note that new peers are added on a regular basis, so, the list below may not be complete and up-to-date. For redundancy and optimal performance, we peer with most peers at multiple locations.

Our SSAE 16 Audited data centers in Springfield, VA (DCA3), McLean, VA (DCA2), and Seattle, WA (SEA2) provide our dedicated sever customers with the security and cost-effective performance of a dedicated back-end network. This means that every customer who orders a server with us will have their own dedicated VLAN and IP space that they can use to communicate between their servers as well as to access various key services provided by Superb. Best of all, Back-end Network is a FREE service to our valued customers.

Back-end Network for your Servers

By having your own dedicated network among your servers, you get the following business-critical benefits to your hosted infrastructure:

Security
Having a dedicated VLAN and subnet means that no other customers can access your data as it crosses the network. This offers a more secure environment as all internal traffic is visible only to your own servers.

Quality of Service (QoS)
Using a back-end network for various administration tasks, such as backup, provides greater quality of service on your primary internet connection. High throughput applications like full backups don't interfere with front-end website operations or any other client/server traffic that forms the core of your business.

Unmetered Access
The internal network does not count against your bandwidth allocation, so data copied between your servers or communications between your app server and database server is not billed as part of your bandwidth quota. Additionally, we provide various services to our customers across the back-end network. These services include DNS, backups, and various operating system patch repositories. Use of these services (like the internal communications above) is also unmetered and does not count against your monthly bandwidth quota.

HOW CAN WE HELP?

Chat or talk now with
one of our professional
hosting specialists